Professional Repair Service At $65 each 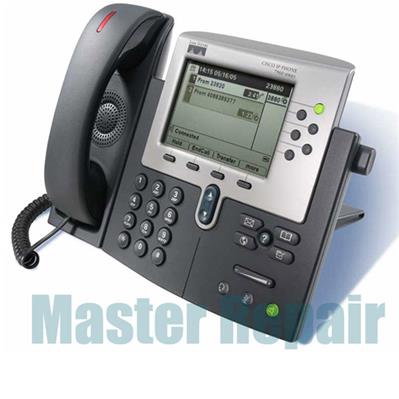 We currently offer top quality repair service for phones. Send your phone equipment to be repaired, we'll repair it and ship back to you within 2-5 business days. We offer a two year warranty on all repairs and refurbished products.
We've done our best to streamline the repair process to make the transaction easy and efficient for our customers. Once you purchase our repair services, we will contact you with a RMA# number. This number is a unique number for each order that you place with us and we ask that you write this number on the outside of your parcel when you send it to us.

Please contact a sales representative toll-free at 855.202.1239 for quantity discount or any questions you may have

The Cisco Unified IP Phone 7962G is a full-featured IP phone with speakerphone and handset designed for wideband audio. It is intended to meet the needs of managers and administrative assistants. It has six programmable backlit line/feature buttons and four interactive soft keys that guide you through all call features and functions. The phone has a large, 4-bit grayscale graphical LCD (Figure 2) that provides features such as date and time, calling party name, calling party number, digits dialed, and presence information. The crisp graphic capability of the display allows for the inclusion of higher value, more visibly rich Extensible Markup Language (XML) applications, and support for localization requiring double-byte Unicode encoding for fonts. A hands-free speakerphone and handset designed for hi-fidelity wideband audio are standard on the Cisco Unified IP Phone 7962G, as is a built-in headset connection and an integrated Ethernet switch.